When friends taste this dish at my place for the first time they are surprised that it tastes so good, looks are so deceiving. This is peasant food at its best. The northern region of Lebanon where I come from is famous for its olive oil. Its cuisine is extremely rich in vegetarian dishes which are mostly based on olive oil, hence bi zeit meaning in oil.

As a young child in spring time, I used to see some of our neighbours, usually the women, pairing up and going to the hills to collect wild dandelion leaves. My mother came from a large town in the mountains of the eastern region so she was more of a city girl and had no idea how to do this. Jamile, a dear family friend who is a wonderful cook and was mum’s tutor when it came to northern cuisine, used to bring to my mother some of what she collected. I did accompany her once, I was eager to learn how to do this. I remember her showing me two species which looked so much alike, one was edible but the other one wasn’t. Her trained eye could tell them apart but I kept on collecting the wrong ones and had to check each one with her. I realised it took years and many trips with her mother, neighbours or aunts as a child for her to learn this skill. I never had the chance to go again and I doubt if anyone from the new generation in our small town knows how to do this. I guess this is another ancient knowledge that will eventually disappear. The skill of food gathering is a dying art in a modern world.

After coming to Australia, of course there were no wild dandelion leaves, but I was told by other Lebanese ladies who experimented before me that both curly endive and chicory work really well. These plants are from the same family and taste nearly identical to the original. Be patient with this dish, do not rush it and cook it with love.

Note: Please do not use any vegetable oil, only good quality olive oil.
Boiled endives shaped into balls (instructions below), freeze well for later use. Remove from freezer, let them thaw and use as per recipe below

Wash curly endives really well, I do it by soaking them in a lot of water and then draining them. I repeat the process while rubbing the leaves against each other until there is no more sediments in the bottom of the bowl. I rinse them really well after that and put in a colander. Peel and slice onions into wedges, half a centimetre wide crescent shape (picture below). Put olive oil in a large pan, let it warm up then add the onions. Let it cook gently for about 45 minutes until onions are quite brown and caramelised. The onions need to be brown otherwise the dish will not taste as good. 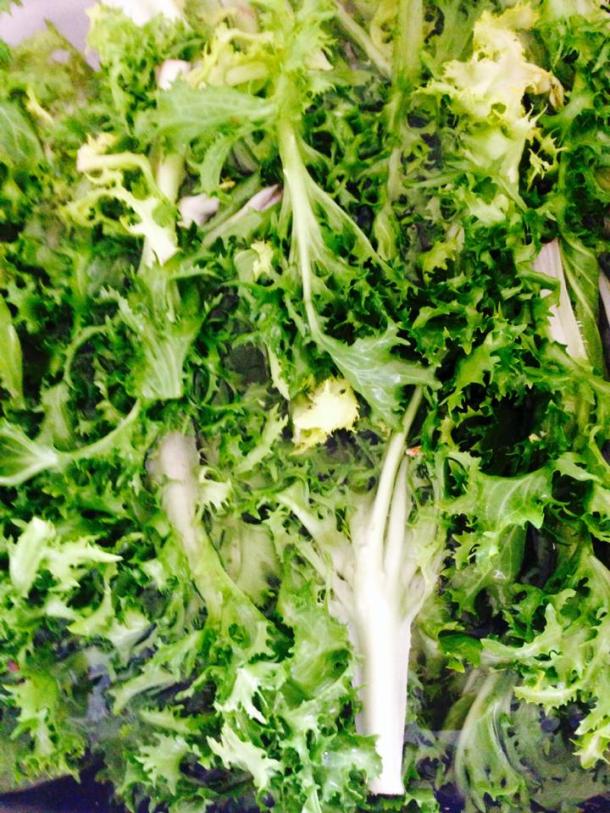 Place leaves in a large pot and cover with water, bring to boil and then simmer. Make sure you push the top leaves to the bottom and let it cook for about 15 to 20 minutes, until the stems are quite tender. Pour into a colander and run cold water over it. You can also blanch it in cold water. Remove and place in a colander and whilst making sure it is not too hot, pick up a few leaves and squeeze them into a ball making sure to remove all excess water. Repeat until all leaves are finished. Place on a board, I like to shape them like a sausage and slice them, then slice in the other direction, making sure there are no large pieces.

Curly endives, squeezed dry and shaped into a sausage ready to be sliced

Once onions are brown add the leaves on top, stir and toss well for a couple of minutes, add salt and then put the lid back on for about five minutes. Turn the heat off and add lemon juice and mix. Serve with extra lemon wedges on the side. 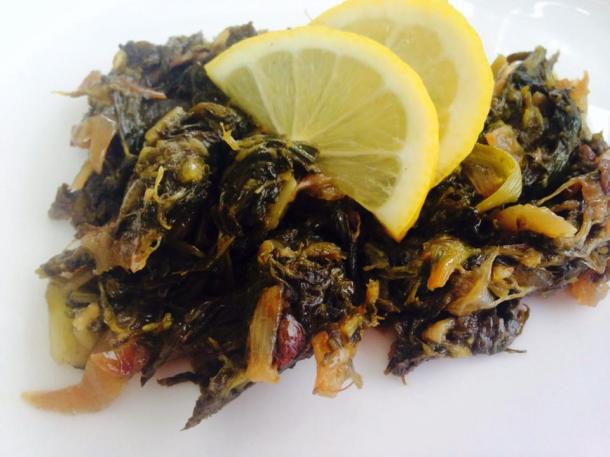