A visit to a shoe repair shop in a nearby town followed by a couple of questions lead to a story experienced by the cobbler at the age of seventeen.

After examining my shoe, he told me I could take a seat and he will mend it on the spot, sparing me another trip back. The tools on the table in front of him were fighting for space. Hammers, scissors, screw drivers and many pieces of leather and timber sat bedside and on top of each other. A packet of Winston was barely noticeable underneath this pile. In the corner three cigarette butts sat comfortably in a sea shell doubling up as an ashtray. It is only ten thirty in the morning, and I could just see how these cigarette butts will start competing for space by early afternoon. 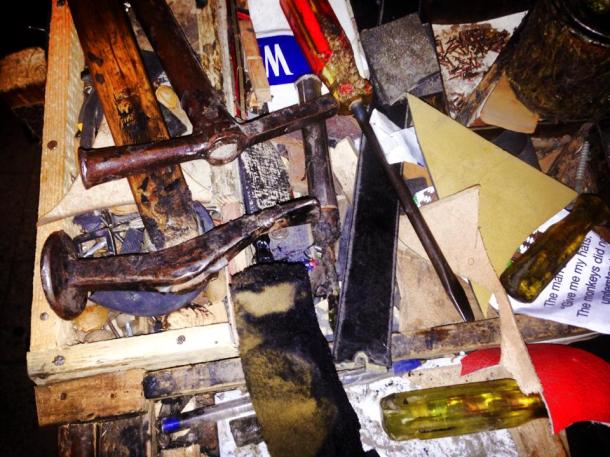 A packet of Winston was barely noticeable underneath this pile

I sat opposite the cobbler and asked him how long he’s been doing this job for. He told me that he’s being doing it all his life. My next question was about what made him choose this profession. That’s when the story began.

” I was 15 years old, and my mother heard about a shoe repairer in Tripoli, she told me to learn this trade. I was too young so she decided for me, she shaped my destiny. My master was a single man who lived on his own, he was very good at his trade. I worked for him for about two years, then one day he asked me to go to his apartment and shut all the doors and windows, he was going away. When he got back, I went to the shop but he accused me of stealing his money, along with his nephew who resided with him from time to time. The police came and took us to the police station. We were separated, and in my cell I could hear the boy’s screams. I knew they were beating and torturing him. Terrified, I was waiting for my turn to come. My door opened and two police officers came in, one of them asked me if I took the money. I told him that I did not steal it, instantly the officer slapped me hard. The other officer told him to take it easy on me, he agreed and started interrogating me. He was so tricky, I nearly confessed to something I didn’t do. I was released that same day.

When I went home I found out that a relative saw me when I was picked up by the police and alerted my parents. They quickly contacted our bishop and influential people interfered. This is why I was spared, but I had to go back to the shop. My parents thought that if I didn’t, people might assume I was guilty. When my master saw me, he told me that I got off easy and I should have been beaten harder. I hated my master after that, I would picture him as a big black phantom. His nephew came back the next day, his legs were badly injured and he was limping. His uncle kept on accusing him but he would deny it.

A couple of weeks later my master’s nephew disappeared. He was sighted in a few places, but my master could not find him. A year had passed and then he was captured in Beirut. He was caught by accident near the beach. A few fishermen had been blast or dynamite fishing near him, and the police searched him as a result, they found 450 Liras on him. Apparently he confessed straight away when they asked him about the money, no interrogation, no beatings and no torture took place.The police would not have known about his history and he could have said that the money was his, but I guess he was tired from living on the run”.

“So tell me, do you enjoy your job?” I asked. He replied, ” It is the only thing I had ever learnt”. Five minutes later, he gave me my pair of shoes and said, “I do have so many other stories”.

10 thoughts on “The cobbler’s story”